“What’s different about Capri? Anthony. He is a consummate professional. He has trained a team of fantastic instructors, who give students real substance and a love for the business. It’s more than just teaching techniques, they want the students to get to the next level. It’s the top school I know of.” 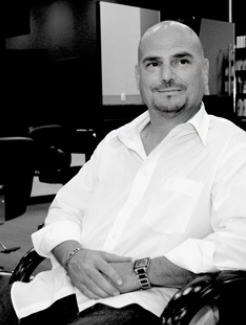 During his 30 years as a stylist, platform artist and educator, Mr. Fiore has worked with many of the top beauty professionals in the world. Recognized as an innovator in the industry, he has elevated Capri into the elite, “the ivy league of cosmetology schools.”

His career began with a decision to follow his own path:

“I was a 19 year old college dropout working as a plumber when I decided to go to cosmetology school. A year later I owned a salon, and now I own the school I graduated from. What other career lets you do that? You can be what you want and you don’t have to sit in a cubicle from 9 to 5.”

His studies have brought him to London, Paris, Chicago, New York City and Washington D.C. He traveled the country for Graham Webb as the first American member of the International Artistic Team. His school has been featured in Modern Salon, Nail Pro, The Stylist and Natural Living. And he was instrumental in winning many of Capri’s 16 International Championships.

“I’ve studied all over the world, and I try to pass on that energy to the students. It’s a marriage of technique and visual creativity. You become inspired by people, and you can create anything. There are no limits,” he said.

Mr. Fiore is a member of the prestigious Intercoiffure and is the former President of the Westchester chapter of the New York Hair and Beauty Association.

For Our Founder, Frank Molinari it wasn’t just about hair… It was art, media, pop culture, clothes… Everything was new then, and he was pioneering it.

Complete this form and an admissions advisor will contact you shortly.